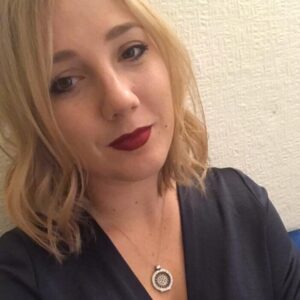 Raised in the Darling Downs region in Queensland, Australia, Kia Carrington-Russell began writing as an angsty teenager, finding a passion for exploring creative realities and world building at fifteen. After graduating high school, she decided to pursue a career in freelance journalism and quickly amended that dream with something that made her heart beat faster and her mind race—fiction. With fresh eyes, she went over her first manuscript, “Possession of My Soul” and began her publishing journey in 2014.

With a recognizable style of kick ass heroines, fast-paced action, and romance that dances from light to dark, she’s been pronounced “the new up and coming author to look out for,” and her writing style referred to as “hauntingly beautiful.”

She has a firm belief in giving back to the writing community—sharing knowledge, promotions, and opportunities that might help other authors reach their readers, including running her own YouTube channel, Bound by Books, where she interviews fellow authors and other industry professionals.

With years in various industries, climbing the corporate ladder, Kia has now settled into a full-time writing career as a successful author and is always looking for the next adventure. She’s travelled the world for both business and pleasure, including living in Edinburgh, Scotland.

Now back in her home country of Australia, she takes her cavoodle, Sia along morning walks on beautiful coastline beaches, building worlds in the sea breezes and contemplating where she’ll go next.