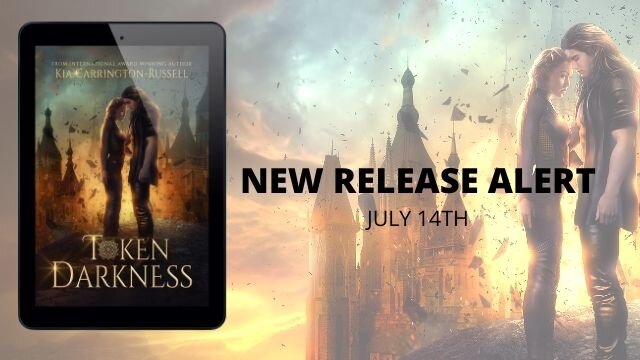 I’m ridiculously ugly crying right now! Yesterday I received the files for the fifth book in my Token Huntress series and can finally share the beautiful cover! TOKEN DARKNESS is due for release July 14th and words can not express how nervous and excited I am for it to be in readers hands. I’ve fostered a huge love for the numerous characters in this series and as I’m writing the final book now, it’s making it all that harder to say Goodbye. But we’re not there yet! No, I can’t let go!

Token Huntress, Esmore, and familiar Chase are designated the task to create a divide amongst the Vampire Council. In the land of ice and snow, they take advantage of a receding throne, promising Council Leader, Tracey, a thriving empire if she were to betray the magistrates of the Vampire Council and ultimately Oppollo’s reign.

With time ticking against them until the upcoming Vampire Council Meeting, Esmore must decide if she wishes to seek out her hidden heart and inherit her birth-given gift and if her entitled power is worth the risk. Because if she can’t control it, it might undo the very man and love she’s sworn to protect.

Amongst the treachery, battles, and chaos, a divide begins between Esmore and her family. What is right and wrong? And what will keep them alive?

Wil Esmore claim the power prophesized to potentially destroy the world, hoping to tilt the scale in the war? Or are there some things in the unknown darkness that should remain untouched no matter how compelling?

~ JUST A TEASER OR TWO! (Because I couldn’t decide)

He’d claimed me before I’d even understood its power or force. “And I will continue to do so.” He curled his hand around my throat in a possessive manner as he tilted my head back slightly. I hissed in anticipation for the kiss I’d been longing for. Not touching Chase or being a part of his euphoria was a starvation I never wanted to know again.

“Will you beg?” I crooned in lustful pleasure. The tone was not of my own. It was the predator that lay dormant within me. He spat at my face and my smile stretched. The mask had saved me the insult. I plunged my hand deep into his chest, crushing bones. His face twisted as he tried to keep his expression neutral. I was so close to his heart, my hand squirming about in pleasure so close to killing him.

My focus was purely on him. “I told you, it was an order,” he gritted out. I could sense Chase trying to interfere. He was calling out to me through the line, but I purposefully ignored him, so intently enjoying my time with my toy. It was just the two of us. I licked my lips, letting my fangs pinprick my tongue. The taste of my own blood was ravishing.

The rain pelted over us as I pushed my face into his, inhaling his scent. His blood was enticing. I dared run my nose toward his ear and nuzzle my lips toward the small streak of blood where I’d cut him. The wound had healed, but the blood remained. “You know,” I whispered into his ear. “I had come to like you as well.”